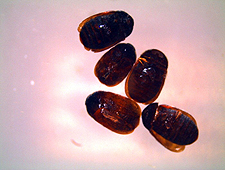 Khapra beetle is a serious pest of stored grain products in Africa, the Middle East, the Near East and pockets of Europe and eastern Asia. The U.S. Department of Agriculture considers the Khapra beetle one of the 100 worst invasive species worldwide. If the beetle is left undisturbed in stored grain it can cause significant grain loss, and in case of seeds, it may lead to significant reduction in seed viability. Once identified, the Khapra beetle may be killed through fumigation. The USDA will determine if fumigation is feasible. In many cases such as in these cases where Khapra beetle was found in passenger’s personal effects, the infested product is simply destroyed by incineration or steam sterilization.

The Khapra beetles were found in three separate passenger inspections arriving from countries known to host the beetle. Upon inspection of the passengers’ luggage, CBP agriculture specialists discovered the pests in containers of seeds and dried beans. The prohibited items were immediately safeguarded for further examination.

CBP agriculture specialists submitted sample specimens of the pests to a local U.S. Department of Agriculture entomologist for identification and learned May 8, that the pests were in fact Trogoderma granarium Everts, which is the scientific name for the Khapra beetle.