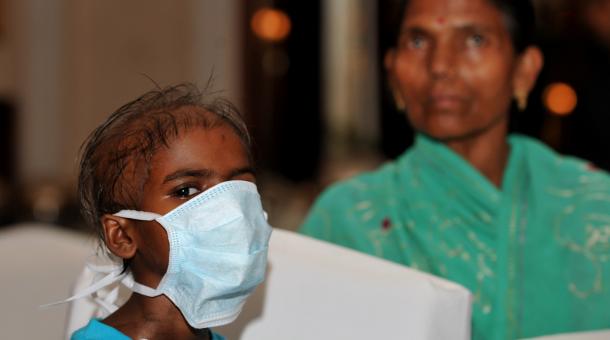 “A child suffering from cancer in New Delhi, India. This week, India’s Supreme Court hears arguments in a case that will affect how many poor people can afford cancer drugs. Novartis is defending a patent on its cancer medication, Gleevec.”- American Public Media’s Marketplace.org (Photo by Sajjad Hussain/AFP/Getty Images)

According to Reuters, Swiss drug maker Novartis is trying to secure patent protection for one of its drugs, Glivec, in India. Its taken the case up to India’s Supreme Court because patent protection was denied protection in the lower courts which found that the drug wasn’t a new molecule, but rather an amended version of a known compound.

According to America Public Media’s Marketplace, Novartis first developed Glivec in the 1990s. Since then, it has modified its drug, which is why Novartis believes it deserves a patent. Ranjit Shahani, a company president, says “Glivec is widely recognized as a medical breakthrough and has been granted a patent in more than 40 countries, including China, Russia, and Taiwan.” However, India’s courts denied the patent in 2006 because its not really new under Indian law, which prevents pharmaceutical companies from from continually renewing patents on existing drugs by making slight changes to original medications.

However, what’s at stake isn’t really about getting Indian patent protection for Glivec in India at all. Reuters explains that India only accounts for a small fraction of Novartis’ total global sales. And Glivec is only used to treat chronic myeloid leukaemia and some gastrointestinal cancers. The issue is much bigger than that. Its really all about the global production of generic drugs.

India is the world’s largest exporter of cheap generic drugs. In fact, India is considered the pharmacy of developing world. Leena Menghaney, who is with the aid organization Doctors Without Borders, told Marketplace that generic versions of Glivec in India cost 96 percent less than in the United States, where the drug is patented and costs $70,000 for a year’s supply. Megnhaney explains, “If Novartis wins, the generic industry will possibly move back from producing some of the drugs they produce today. So this will have a chilling effect on generic competition.”

Novartis and other large drug makers are concerned that a ruling against patent protection would cement India’s status as a country in which patents are extremely hard to protect. Critics of big Western drug makers say that a win for Novartis would jeopardize the supply of cheap generic drugs to hundreds of millions of poor people around the world.

So one the one hand, there are millions of poor people who can’t afford to pay for drugs that are protected by patents. On the other, pharmaceutical companies are fighting for the exclusive rights to produce the drugs that they invented, in which they have invested countless years and resources.