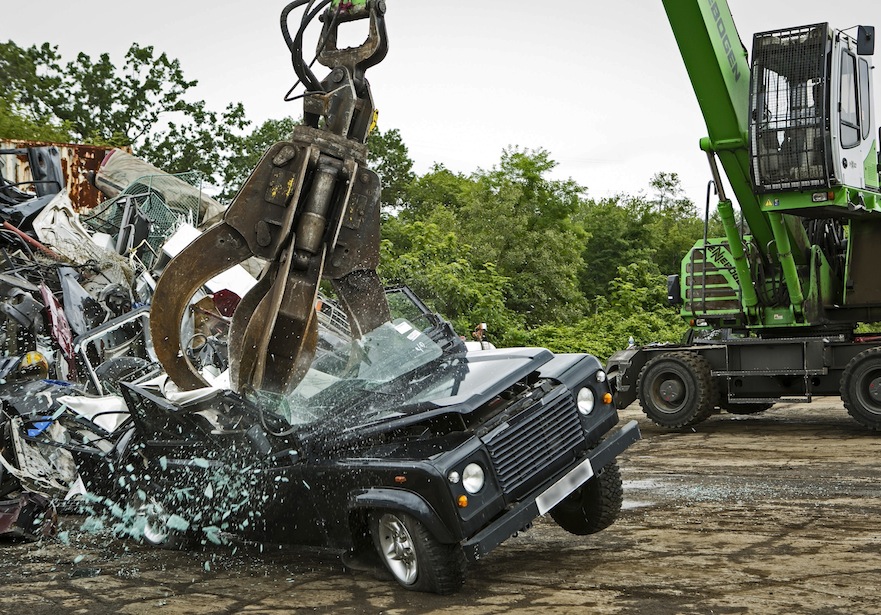 A Land Rover Defender, which U.S. Customs and Border Protection (CBP) officers seized at the Baltimore seaport April 16 as an illegal and unsafe import, was destroyed in spectacular fashion at an undisclosed Maryland salvage yard recently.

This Defender is one of dozens stopped in recent months at ports of entry in Philadelphia, Norfolk, Va., Charleston, S.C., Savannah, Ga., Jacksonville, Fla., Houston and Tacoma, Wa., that violated federal highway safety standards, including the standards requiring airbags.

A portion of these illegal shipments will require destruction, as their Vehicle Identification Number (VINs) was intentionally altered and/or manipulated.

These Land Rover Defenders were represented on import entry documents as being 25 years of age or older, but may actually be newer vehicles whose Vehicle Identification Numbers (VIN) have been fraudulently altered.

These fraudulent actions are intended to take advantage of the exemptions within the statutes and regulations administered by NHTSA and EPA that allow older, nonconforming vehicles to be imported without restriction (NHTSA – 25 years old and EPA – 21 years old).

The overseas value for this model of vehicle is approximately $25,000. However, the resale value in the U.S. can run as much as $150,000 per vehicle depending on its model year and condition. Because these vehicles cannot be lawfully imported into the U.S. unless they are at least 25 years old, their rarity also inflates the stateside purchase price.

“Ensuring the safety of imported products is a top priority for CBP,” said Allen Gina, CBP’s assistant commissioner for international trade. “The concerted targeting efforts of CTAC and the vigilance of CBP officers and import specialists at our ports of entry will help ensure that unsafe vehicles from overseas markets do not reach our roadways.”

Prospective buyers of imported vehicles can confirm the validity of the vehicle by checking the VIN in a vehicle history report.

Buyers who suspect that a vehicle is being illegally imported are encouraged to report suspected trade violations. All information submitted to CBP is voluntary and confidential. To report a possible trade violation, please visit eAllegations. ( eAllegations)

For additional information on the CTAC and import safety, please visit CBP.gov/Trade, and click on the “Priority Trade Issues” tab. ( Trade )