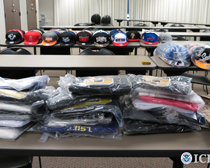 Last year HSI New Orleans led the nation in counterfeit NFL seizures with more than 7,100 items at an MSRP of more than $1 million. As the host city of the upcoming Super Bowl, Raymond R. Parmer Jr., special agent in charge of HSI New Orleans, said HSI special agents are particularly focused on the identification and seizure of counterfeit sports memorabilia ahead of the game.

“The bottom line is counterfeit goods steal revenue from legitimate businesses and shortchange buyers who think they’re getting the real deal,” said Parmer. “Criminals should take note that we are actively looking for contraband on a daily basis and counterfeit goods will be seized and violators prosecuted to the fullest extent of the law.”

During a routine operation HSI learned the counterfeit goods seized Tuesday were being shipped from an overseas location into New Orleans. HSI then intercepted the shipment and seized the contraband items. Although there were no arrests, the HSI investigation is ongoing.

HSI and partner National Intellectual Property Rights Coordination Center (IPR Center) continually work to keep counterfeit goods off the streets and bring those responsible for producing and distributing them to justice.

The IPR Center is one of the U.S. government’s key weapons in the fight against criminal counterfeiting, piracy and commercial fraud. As a task force, the IPR Center uses the expertise of its 21-member agencies to share information, develop initiatives, coordinate enforcement actions and conduct investigations related to IP theft and commercial fraud. Through this strategic interagency partnership, the IPR Center protects the public’s health and safety, the U.S. economy and our war fighters.